FICEBO research was recently highlighted in an article in “Der Spiegel” (The Mirror), which is the largest weekly news magazine in Europe with a weekly circulation of 840 000 copies. 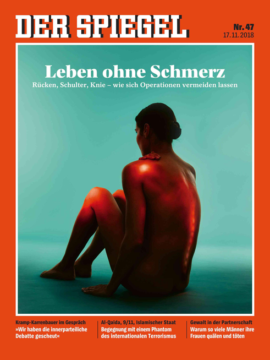 This article entitled “Leben ohne Schmerz” (Life without pain) discusses the work of our esteemed colleagues Andy Carr and Bruce Mosely as well as our FIDELITY trial in the context of overtreatment.

Some of the key points from the article include:

• Only 20% of orthopedic surgical procedures have good quality evidence to show superiority over conservative treatment.
• Rates of acromioplasties in Germany have risen by 30% between 2008 and 2015.
• Spinal fusion surgery has increased by 71% between 2007 and 2015 in Germany.
• Healthcare costs have risen by 17% in Germany between 2008 and 2015.
• Following re-evaluation of 3000 German patients by financially independent doctors, 80%, 90%, and 92% were dissuaded from having knee, spinal and shoulder surgery respectively.
• Placebo controlled trials of knee and shoulder arthroscopy have failed to shown benefit from the so called “critical therapeutic element” compared to sham surgery.
• The German Society of Orthopaedic and Trauma Surgeons have been quick to respond in official statements that these results will not have an impact on treatment protocols in the German healthcare system and instead they have chosen an “alternative” interpretation of these study results.

The five-year results of FIDELITY trial published in British Journal of Sports Medicine!