Conventional wisdom dictates that it takes six weeks for bone fractures to reach a sufficient strength the strains subjected by weight-bearing.

Evidence to support such assertion?

A bioplausible story, with some support from biomechanical studies and some before-after patient follow-up series… the typical story behind most “established truths” in medicine.

Our colleagues from Oulu University hospital have spearheaded clinical research on the management of ankle fractures and came up with an idea to test whether this century-old “medical truth” stands the scrutiny of a randomized, controlled trial.

Together with colleagues from Tampere University hospital, they carried out an RCT comparing the conventional 6-week cast immobilization with 3-weeks in either a cast or an orthosis in patients with Weber B -type ankle fracture – the most common ankle fracture.

When the original team had run into some problems trying to publish the trial, they turned to FICEBO for help in early 2017. Two years of hard work, multiple rounds of revision, countless hours drafting and revising the manuscript… but persistence finally paid off: 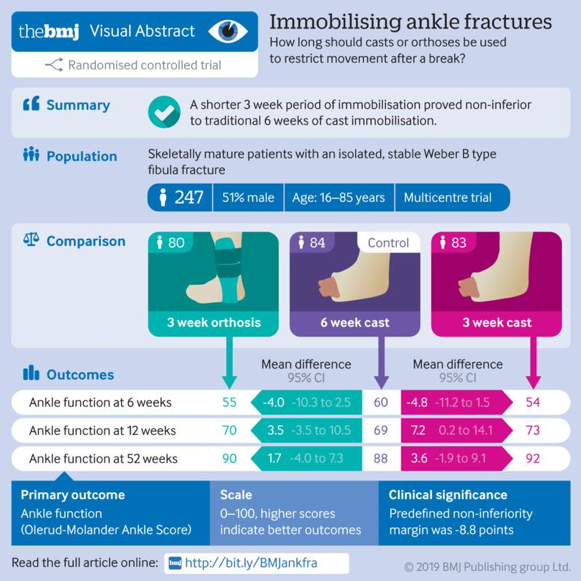 FICEBO is obviously honoured and privileged to be included in such an amazing team of clinical scientists as this Oulu – Tampere research collaboration is. Thank you Tero Kortekangas, Harri Pakarinen, Tapio Flinkkilä, Pasi Ohtonen, Simo Nortunen and Heidi Haapasalo for your wonderful trial!

This Oulu-based team has actually championed the research on ankle fractures:

What’s next on their agenda?

In this just-published trial, only ankles that were first proven stable using an external-rotation (ER) stress testing, were treated non-operatively. But do you really have to operate those proven unstable using the ER stress testing?

Collaboration with Cochrane and Monash Uni